Most of your time using Demeter will be spent in the program screen: 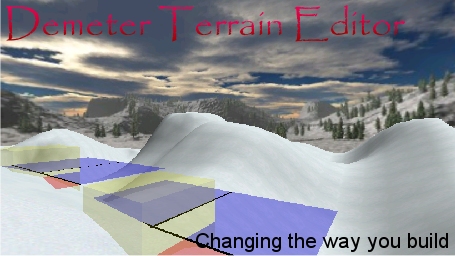 Uni Host:  The address of the host of the universe to which Demeter should attempt to log in.  The default value is 64.94.241.250, the main Active Worlds universe.  Text values such as "edu.activeworlds.com" are also accepted in addition to IP addresses.

World:  The name of the world to enter.

Citizen Number:  The citizen number of a Caretaker in the world specified in the "World" field.  If this citizen number does not have Caretaker rights, Demeter will be unable to perform its job.

Port:  The port on the universe server to which to connect.  The default is 5670, used for most universes, including the Active Worlds universe.

PPW:  The privilege password of the citizen specified in the "Citizen Number" field.

Disable Time:  In order to reduce processor load, Demeter operates by "terrain sessions," which means that terrain around a given avatar is only surveyed and dealt with if the avatar in that area is attempting to modify the terrain.  This implementation saves processor load and bandwidth by not wasting resources on those citizens who are not currently using Demeter's functions.  The Disable Time sets the amount of idle time (in seconds) until a user's terrain session is disabled.  Setting this value too high can cause unnecessary performance problems, but setting it too low can annoy users because their session will "time out" too quickly.

Warn Time:  How long a terrain session can remain open before Demeter warns the citizen that it is about to expire.

Min Terrain Texture:  The minimum terrain texture number with which users in the world can build.  In most worlds this value will be zero, but it can be increased above zero if there are certain textures that only the world Caretakers would like to use.  For example, this value could be specified as 2, leaving textures 0 and 1 available only to Caretakers.

Max Terrain Texture:  The maximum terrain texture number with which users in the world can build.  This number cannot exceed 62, the limitation placed on terrain by the Active Worlds browser.

Allow Bot Use (not pictured):  Specifies whether to allow bots to use Demeter.  Bot use can greatly enhance the ability of builders to copy buildings with all terrain around them, but also presents the possibility of abuse.

Allow Tourist Use (not pictured):  Specifies whether to allow tourists to use Demeter.  Tourists can learn how to use Demeter and build interesting buildings; however, tourist use allows for anonymous vandalism in worlds where tourists are enabled if not carefully monitored.

Max Queries:  Specifies the number of cell queries that can be outstanding simultaneously.  If you're not sure to what to set this value, leave it at its default "5."  Higher numbers may speed up processing on fast processors, but could also result in crashing Demeter.  Lower numbers could result in slow querying.

Max Commands:  Specifies the number of show, hide, or delete requests that may be outstanding at any given time.  If you're not sure to what to set this value, leave it at its default "5."  Higher numbers may speed up processing on fast processors, but could also result in crashing Demeter.  Lower numbers could result in slow response time when a huge request like "show all" is accessed.

Auto-Login:  Instructs Demeter to log in immediately upon its next startup. This allows a shortcut to Demeter to be placed in the Windows startup group to start Demeter upon system startup without user intervention.

Default Height:  The height (in meters) to which the terrain in any cell in the world is restored if a terrain marker in that cell is deleted.  The default value is -0.1m, because most legacy ground objects in worlds that will be changing to terrain are actually set at -0.1m altitude, not at zero altitude as might be expected.

Flood Commands:  Specifies the number of verbal commands one user (or bot) can issue during any given ten-second interval.  If a user exceeds this number of commands, he, she, or it is ejected.

Flood Eject Duration:  Specifies the duration of ejection (in seconds) that a user who exceeds the maximum number of "Flood Commands" will experience.

The labels at the bottom of the screen show Demeter's status at all times:

World:  The name of the world to which Demeter is logged in.

Connection State:  Either online, offline, or an error message stating why Demeter disconnected.

Terrain Cells:  The number of cells in the world that Demeter has queried for terrain markers.  Demeter queries all cells within 20 meters of an avatar that has enabled terrain in an attempt to locate terrain markers.

Cells in World:  The total number of cells in the entire world.

Percent Queried:  The percentage of the world that has been queried through enabled terrain sessions; simply the number of "Terrain Cells" queried divided by the number of "Cells in World."

Terrain Markers:  The number of terrain.rwx objects Demeter has actually located through its querying of Terrain Cells; in other words, the number of cells Demeter has detected where terrain has been modified by users.

Avatars Present:  The number of citizens and tourists currently in the world.

Terrain Sessions:  The number of users who are currently using Demeter to build with terrain (have issued a d:begin statement).

The "close" button closes Demeter and disables terrain features in the world.

Next Topic: The Activity Log
Previous Topic: Technical overview
Back to Menu